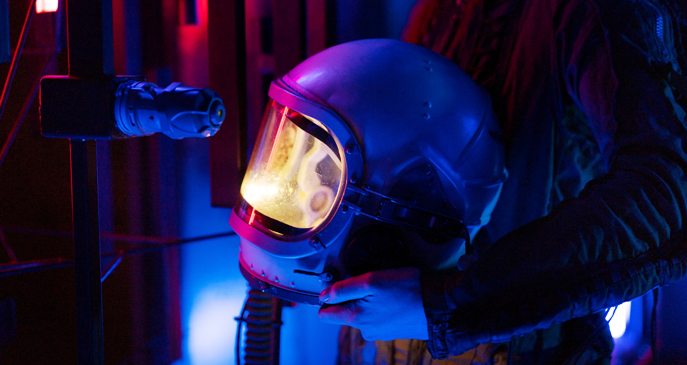 Recently, representing the Mars on Earth Project (MoEP) Community in the World and also my country; I participated in the virtual mission organized by the Brazilian Research Station Habitat Marte, which we cooperate with.

I took part as an analogue astronaut in this mission called “Mission 75” by Habitat Marte and this mission was completed recently. Although the Mars Project in the World has prepared a detailed mission return report within the scope of in-community training, I would like to share with you my experience and what it has contributed to me, albeit in a few lines.

We took part as a team of 8 analog astronauts within the scope of the 75th mission of Habitat Marte. The international team I am involved in; It was determined as individuals from Brazil (2), Slovakia (1), India (2), Yemen (1), Chile (1) and Turkey (1). During his assignment, Prof. Julio Rezende was our team leader.

Prof. Julio Rezende talked about his expectations from us as analog astronauts and the detailed content of the mission on his first mission day. According to the job description; all participants were conducting research at stations located at different points on Mars and were also the responsible chiefs of these stations.

Every day during the mission, we gave various meteorological reports about our location to the main base, which was accepted as the location of the base team leader. As the determined and announced day came, each participant made a detailed presentation about their station and research topics. The language of communication throughout the entire mission was considered English.

Whatsapp network was preferred for instant communication and simulation, and thus analog astronauts working at different stations remained in constant communication with each other. Although there were some late attendees due to the effect of sandstorms, but each meeting was quite productive in itself.

Thanks to this virtual mission; different people from many different countries of the world met on a common interest and communicated. In this way, we had the chance to consult on many certain issues, thanks to a common language.

If you impress your team in a mission like this, you’re likely to get offers, even for post-mission events. For example, Karin Brünnemann, general manager of 4CEE; He offered me a half-hour talk during space week on October 9, 2021.

I think that participating in such events will be a good step both in terms of improving ourselves and representing Turkey. Every successful step we will take increase the recognition and inclusion of our country’s name in these studies.

I would like to thank the Mars Project (MoEP) Community on Earth, which I volunteered for, not just for participating in the mission at first and also for their support during this mission, and to our community volunteer, the molecular biologist Ms. Zeynep Es, who will take part in the 78th Task Force this time in August 2021,I wish you success in your job.

With the launch of the Era of space exploration in the middle...

The Grizu-263A pocket satellite, which was developed by the Grizu-263 Space Team...

Have you ever touched a child’s heart and dreams? We touched. These...

Dyson Spheres and the Search for Alien Civilizations

Words like ‘aliens’, ‘extraterrestrial life’, and ‘advanced civilizations’ have always sparked our...